Please support us on PATREON and help chrvoje engineering channel be sustainable
https://www.patreon.com/chrvojeengineering

What is it? and How does it work?

A miniature circuit breaker is an automatically operated electrical switch designed to protect an electrical circuit from damage caused by excess current. Typically resulting from an overload or short circuit. Its basic function is to interrupt current flow after a fault is detected. Unlike a fuse which operates once and then must be replaced. A circuit breaker can be reset either manually or automatically to resume normal operation. An MCB embodies complete enclosure in a mold of insulating material this provides mechanically strong and insulated housing (Picture 1.1). 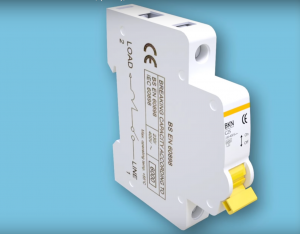 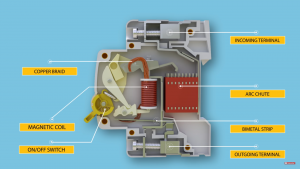 The most important thing that circuit breaker is doing is to safely and reliably switches off electrical circuit during abnormal conditions of a network that means overload condition as well as faulty condition. Under normal working conditions circuit breaker work when we switch operator manually from position off to position on. Electric current carrying path shown in picture 1.3. 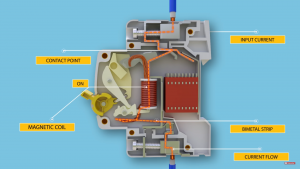 First incoming terminal then contact point of moving and fixed contacts then magnetic coil then bimetallic strip then outgoing terminal all arranged in series. Under overload condition, current through the  metallic strip causes to raise of the temperature of it the, heat generated within the bimetallic is enough to cause deflection due to thermal expansion of metals this deflection further releases the trip latch and contacts get separated. The visual indication of this trip can be observed by automatic movement of the operator to OFF position (picture 1.4). In tripping operations and arc is formed when the contacts start separating this arc is then forced into Arc chute plates where is formed into a series of arcs and at the same time energy extracted and cools it. 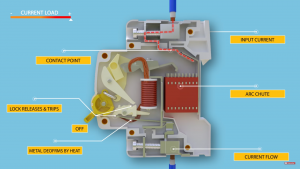 Miniature circuit breakers are classified into three major types according to their instantaneous tripping currents they are Type B, Type C, Type D.

This type will trip instantly at a rate of three to five times its rated current. these are normally used for resistive or small inductive loads where switching surges are very small therefore these are suitable for residential or light commercial installations (picture 1.5). 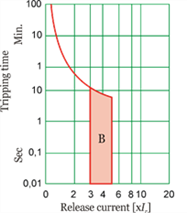 This type of MCB will trip instantly at a rate of five to ten times its rated current These are normally used for high inductive loads where switching surges are high such as small motors in fluorescent lighting in such cases type C are  preferred to handle higher value of short circuit currents. therefore these are suitable for highly inductive commercial and industrial installations (picture 1.6). 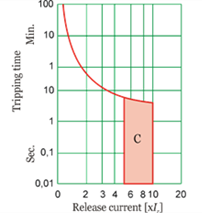 This type of MCB will trip instantly at a rate of ten to twenty five times its rated current these are normally used for very high inductive loads where high inrush current or very frequent these are suitable for specific industrial and commercial applications in the common examples of such applications include X-Ray machines U.P.S. systems industrial welding equipment large winding Motors etc (picture 1.7).

How to Wire Contactor and Motor Protection Switch...

Alternator, How it works?

What is Inductor? What is inductance?

What is The Doppler Effect?

How Does a Transformer Works?